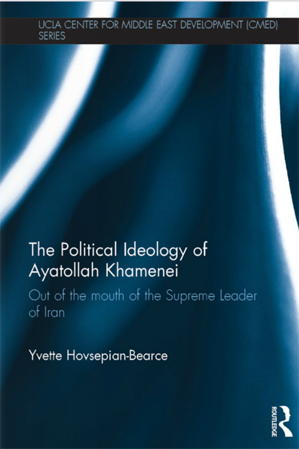 The Political Ideology of Ayatollah Khamenei

Out of the mouth of the Supreme Leader of Iran

This is the first book that traces the development of the theocratic ideology of the Supreme Leader of Iran based on close study of his own statements in their original Farsi.  My book provides new insight into the impact of Khamenei’s political thought on Iran’s domestic, regional and international policies.

By studying the words of the Supreme Leader in their original contexts, I am able to show how Supreme Leader Khamenei really thinks. My book specifies how his theocratic political vision directly influences Iran’s nuclear negotiations with the U.S., Iran’s policies toward the region, its deep enmity toward Israel, and its ambition to become a world power.

I have written an interpretive guide to Khamenei’s worldview, and illuminated the interac­tion between religious and political spheres in his decision-making.

My book adopts a thematic and chronological approach to analyze the Supreme Leader’s thought and beliefs. The documents drawn upon span his early life and political activism during Ayatollah Khomeini’s Islamic revolutionary movement (1939-1979), his role in the Islamic government after the establishment of the Islamic Republic (1979-1981), his 8-year presidency coinciding with the Iran-Iraq War (19891-1988), and his rule as the second supreme leader following the death of Ayatollah Khomeini, founder of Iran’s Islamic Revolution.

Specific topics my book addresses include Khamenei’s perceptions and interpretation of the supremacy of Islam; his views about America, Palestine, and Israel; his interpretation of, and objectives for, Muslim unity and the export of Iran’s Islamic culture; his definition of political freedom and independence; his idea of domestic progress; his goals for Iran’s nuclear program; his view of Iranian youth; and his vision of democracy pursued with the guidance provided by strict adherence to revolutionary Islamic faith, or what he calls “religious democracy.”